Henry and I were asked to demo ride at the PC state coaching school a few weeks ago by my coach who was presenting on how to begin the retraining of off the track horses. I was asked to do the riding component showing a horse who has progressed with the basics and my friend Emily was going to demonstrate the groundwork component.

I have attended these schools before so I knew roughly what to expect. I wasn't prepared for the number of cars there as we pulled in. I definitely felt nervous seeing how many cars there were but put it out of my mind and instead focused on getting ready.

I had been told not to warm him up too much because we wanted him to be fresh and a bit tense so Em and I walked over together and waited outside while the previous session finished. The applause from the crowd got Henry attention and when we entered the arena there were about 200 people there and Henry was so concerned about them all. I could feel his heart beating! I worked at getting his head down and let him stand for as long as he could, then walked a circle, rinse and repeat while Emily did her part of the presentation.

Soon enough we were up and we started by demonstrating stop and go, then turn, then into trot and we did the same. I had to pretend Henry was less trained than he is and Bec said I needed to ride looser and be more random. Poor Hen was so confused and started trying to work out what  I wanted which worked for us because we wanted to demonstrate a horse not in self carriage. 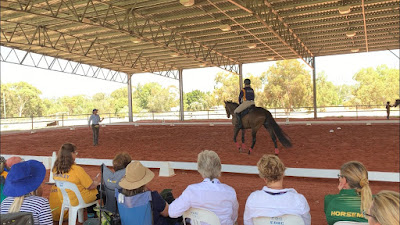 We showed self carriage too, and how to test for it and Henry was so good for it. He just toodled along in self carriage doing every thing I asked despite the environment.

We also demonstrated the beginning of jumping and how to incorporate self carriage in jumping. Bec had set up a two stride rein free zone before and after the jump to emphasise allowing horses to make mistakes and to show when riders shouldn't interfere. 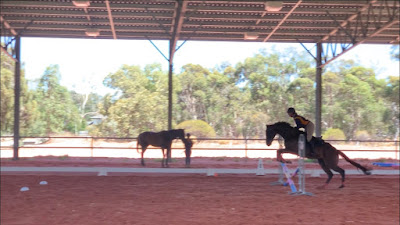 Henry was perfect, too perfect! He didn't show any  loss  of self carriage at all, event when I tried to make it happen! The only way he would accelerate is when I put my leg on which is exactly what you want. We jumped off both reins and he maintained the correct leads too, even when I tried to get him to switch. Nice to know my hard work has paid off but again, not the best for the demonstration!

We finished by breaking down the turn aid and showing direct and indirect rein. We then stood while people asked questions and then we were done. I stayed mounted for the applause which he only worried about a little bit and he stared at the people as they moved around between presentations. I think he was quite relieved when we left the arena. 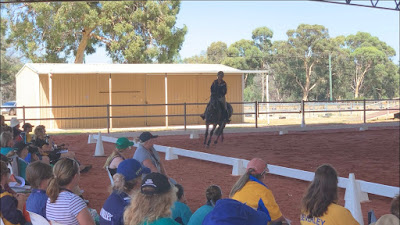 I was so so proud of him. He handled everything so much better than I could have hoped for, and he was a little too good. It made it really clear how solid our training is, and it was really fun to be part of! I would happily do it again! 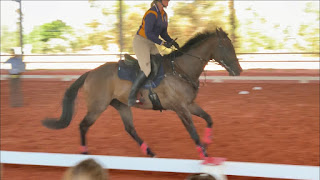 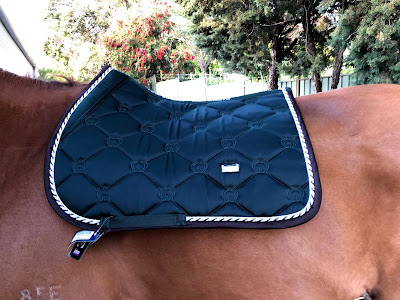 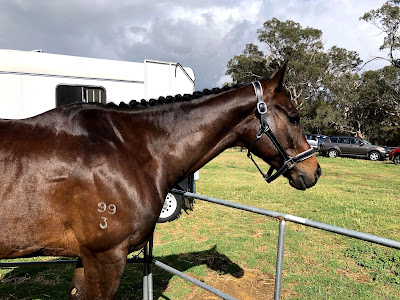